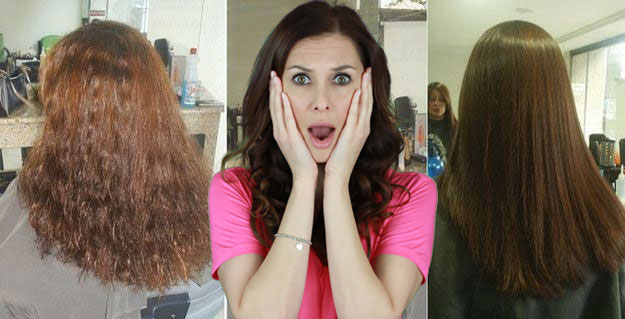 So there is a new/newish hair-straightening product out there. It’s called “Brazilian Straightening” (Get your mind out of smut lane, not that Brazilian). Not sure why it’s called that because one of the main ingredients is illegal in it in Brazil. Go figure!

It claims to take your curly hair and relax it. By that I mean loosen the curl, take away the frizz and make it much, much easier to blow dry straight. As always there is a catch…It contains Formaldehyde. A colorless, flammable, strong-smelling chemical that is used in building materials and to produce many household products. Formaldehyde has been classified as a known human carcinogen (cancer causing substance) by the International Agency for Research on Cancer and as a probable human carcinogen by the U.S. Environmental Protection Agency. Hmmmm… when could it be good to put on your scalp (which then goes directly into your hair follicles) what they use to embalm dead people? . Yes, it does touch your scalp on application. They claim it has a small amount of formaldehyde, but it’s been said that the maximum allowable concentration of formaldehyde for products that touch the skin is .2%. That is not an effective amount to straighten hair, so an additional percentage is being added

How would we know? Do we know what the long-term effects of applying this toxic solution to our scalp every 3 or 4 months for the next 10-20 years? As much as I wanted it (yes I have a “curly fro”), I had to “Just Say No”. It was even offered to me for free from a salon that wanted to test it on me and use me as an example. The treatment can cost anywhere from $300-500, plus tip. Some places may charge a little less now.

Ok, so done! Right? Wrong. Then they came out with a newer version that claims to be formaldehyde-free. I was told it contains Annaldehyde. Well, there is still a “hyde” in there. What is this? My guess is a milder derivative. When I look up the definition it mentions Aldehyde, which is a form of formaldehyde. I’m sure this is what they meant.

So after going back and forth, researching, even calling the company, (which has customer service agents that rave about wonderful it is… imagine that!), I decide to do it. Yes, it took away the frizz. Yes, it relaxed the curl and yes, it made it easier to blow dry. I’m going on month 3 and it is still in effect. It claims to just wash out, not grow out like it’s Japanese straightening counterpart that makes curly hair “stick straight” and has an awkward grow out stage.

It has definitely changed the structure of my hair. “Curly tops”, as us curly haired girls are referred to, usually have dry hair. I could go a week without washing it. Well, at least I thought so even though maybe my boyfriend didn’t… Not the case anymore. It gets oily the next day. What the hell is in this stuff? What could happen if I do this procedure to my hair every 3 months for the next 10 years? I know this isn’t a typical green article. I could get into the fact that after I wore this 4 hour concoction (during which the initial application process I felt nauseous and sat outside), you wash it off and down the drain. There. Now on top of all I said, where does it go? We have to be our own police. What goes into our body and on our body. There was a time when we didn’t know smoking was bad, right? With so many different unknown potions out there, it might be difficult to pinpoint which one causes illness in the future. Maybe it’s a combo deal. Not a Big Mac, fries and a coke, although I’m sure eventually that will get you too. How ‘bout Brazilian Hair Straightening, a spray tan, Botox, coffee with Splenda and a ciggy. A model’s diet for death. Which one will get you first?

We need to remember that just because it’s available to us does not mean it is not harmful. Do your research. See if it’s right for you. It’s not right for me. I for one will not be doing it again. Straight hair does not always have to be in style. Ya know why? Because it’s “Fro Season”! Roseanne Rosannadanna maybe you were onto something.

Formaldehyde is a colorless gas compound (HCHO) that can irritate eyes, mucous membranes and the upper respiratory system. It can be inhaled or absorbed by the skin. Formaldehyde is also a metabolic product of normal living cells. Formaldehyde is an excellent resin and binding agent and is very inexpensive to produce which contributes to it’s wide usage (approximately 6 billion pounds are produced each year). The only way for you to know how much formaldehyde may be in your home is to test.

Where Can Formaldehyde Be Found?

Formaldehyde is found virtually everywhere, indoors and out, naturally occurring and man-made. It is a combustion product found in cigarette and wood smoke, natural gas, kerosene, exhaust from automobiles, incinerators and power plants. It is also widely used in building materials especially glue, Urea-formaldehyde foam insulation and pressed-wood products such as plywood, particle board, paneling and wood finishes. Many floor coverings contain formaldehyde such as carpet, padding and adhesives. Also used in furniture, paper products, cosmetics, deodorants, shampoos, fabric dyes and permanent-press fabrics, inks, disinfectants, air deodorizers and carpet deodorizers. Mobile homes, motor homes, and travel trailers are known for high amounts of formaldehyde since so many of their components may be made from particle board or pressed-wood products.

Why Is Formaldehyde Dangerous?

What Are The Health Effects Of Formaldehyde?

Now more than ever the world could use a little k

Whether the outcome is what you want or not, we ne

All dressed up and staying home! Happy Halloween!

What do you do to stay hydrated?💦 Did you know

Take Care Of You Boo!💗 My article for @official

The Lexus UX250h is a hybrid that has someone spec

Even if you don’t believe in climate change, I know you believe in #cleanair & #water. These fundamental needs of life go hand in hand. We have the technology to make a change for the better of all humanity. #sustainableliving #gwtiff #choosetocare